skip to main | skip to sidebar

The Wolf at the Door: Forthcoming this Spring

This Spring Chelsea Station Editions is publishing The Wolf at the Door, my novel set in a haunted gay-owned guesthouse in the French Quarter of New Orleans. It is not a horror story per se, but more of a comic hallucination of an overworked man who drinks too much and thinks he is seeing ghosts and angels and all sorts of other spirits. I hope that it’s regarded as the kind of spiritual adventure of, say, A Christmas Carol or It’s A Wonderful Life. I think Avery, the main character in the novel, comes close to who I am today, a funny, boozy, aging gay man, but this was also another story that required me to do a lot of historical research — this time on New Orleans and its history of slavery and the fact that there were many freed slaves who owned slaves themselves.

Dark Scribe magazine has a nice interview up in their queer horror issue about The Haunted Heart and Other Tales. Link is here.

Word has also arrived that The Haunted Heart and Other Tales is nominated for a Gaybie award for Best Gay Fiction. Kudos also to Sean Meriwether for The Silent Hustler. Details and voting info

can be found here.
Posted by Jameson Currier at 7:49 AM

Jameson Currier
Jameson Currier is the author of six novels: Where the Rainbow Ends, nominated for a Lambda Literary award, The Wolf at the Door, The Third Buddha, What Comes Around, The Forever Marathon, and A Gathering Storm; and four collections of short fiction: Dancing on the Moon; Desire, Lust, Passion, Sex; Still Dancing: New and Selected Stories; and The Haunted Heart and Other Tales, which was awarded a Black Quill Award for Best Dark Genre Fiction Collection. His short fiction has appeared in many literary magazines, anthologies, and Web sites. His reviews, essays, interviews, and articles on AIDS and gay literature and culture have been published in many national and local publications. In 2010 he launched Chelsea Station Editions, an independent press focused on gay literature. In 2011 he launched Chelsea Station, a literary journal of gay writing, now online at www.chelseastationmagazine.com. He currently resides in Manhattan and can be reached by e-mail at jimcurrier@aol.com.

The Wolf at the Door

A witty tour de force of spirits, spooks, and sinners, a supernatural roller coaster set in the Big Easy that is giddy, soulful, and sentimental. 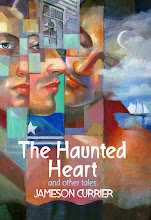 The Haunted Heart and Other Tales
ghost stories by Jameson Currier


In his newest collection of short stories, The Haunted Heart and Other Tales, author Jameson Currier modernizes the traditional ghost story with gay lovers, loners, activists, and addicts, blending history and contemporary issues of the gay community with the unexpected of the supernatural.

“Jameson Currier’s The Haunted Heart and Other Tales expands upon the usual ghost story tropes by imbuing them with deep metaphorical resonance to the queer experience. Infused with flawed, three-dimensional characters, this first-rate collection strikes all the right chords in just the right places. Equal parts unnerving and heartrending, these chilling tales are testament to Currier’s literary prowess and the profound humanity at the core of his writing. Gay, straight, twisted like a pretzel…his writing is simply not to be missed by any reader with a taste for good fiction.”
Vince Liaguno, Dark Scribe Magazine

Still Dancing: New and Selected Stories by Jameson Currier, published by Lethe Press, brings together 20 of the author’s short stories about the impact of AIDS on the gay community which have been written over the last three decades. Along with ten stories from Currier’s debut collection Dancing on the Moon (1993), praised by The Village Voice as “defiant and elegiac,” are ten newly selected stories written by one of our preeminent masters of the short narrative form. And for this new collection the author has also chosen stories that revolve around gay New Yorkers—those lost, those surviving, those displaced, those undaunted, and those who became expatriates.

"In these stories, Currier fictionalizes queer life and times from three decades of the AIDS era, capturing the years in his prose. It has the literary heft of Camus and the quiet urbanity of Cheever…. Currier chronicles not only a defining era in gay America, but the private lives of the people who triumphed through what looked like defeat. These lives are often so finely drawn, Currier never has to resort to cliché… Gritty, esoteric, funny and passionate, Currier’s courageous prose reminds us that we must never forget."
Lewis Whittington, EDGE